MCC versus Italy A - Game 2

Although rain had seemed likely, the MCC turned up at the Venice CC ground at Campalto to find the clouds lifting and the promise of sunshine.
The Club won the toss and elected to bat. Just like the previous day, runs were difficult to come by and after the loss of the big hitters, retrenchment was needed. The middle order batsmen batted with care and diligence as they painstakingly built a defendable total. The Italy A captain juggled his bowling order with skill and set carefully thought out fielding positions with great precision. The MCC scored 191-8 off their 50 overs and at the innings break the game was anyone's.
The Italy A batting started well. Like the previous game they showed they were prepared to take on the bowling, but this time the luck was with them and they made good headway against the Club bowling. Although they lost early wickets, the middle order batsmen continued the assault on the MCC bowlers. Man of the match Fida plundered 69 runs, including some fine 6s. The hosts went on to reach their target in the 27th over.
After the game there were speeches and presentations. We all felt that this tour had been a great success, The MCC had learned of the improving standard of Italian club and national cricket, and of the infrastructure to support it. The club and national sides had the chance to test their skill against a good cricket side and had much to take away from their encounters.
We have all made friends and will follow the progress of Italy with interest. 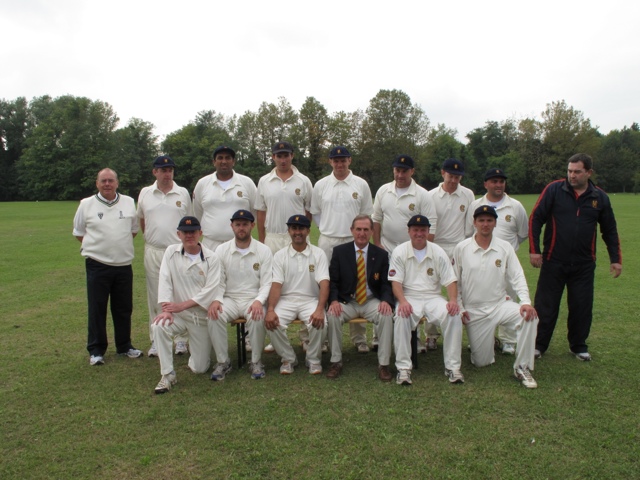 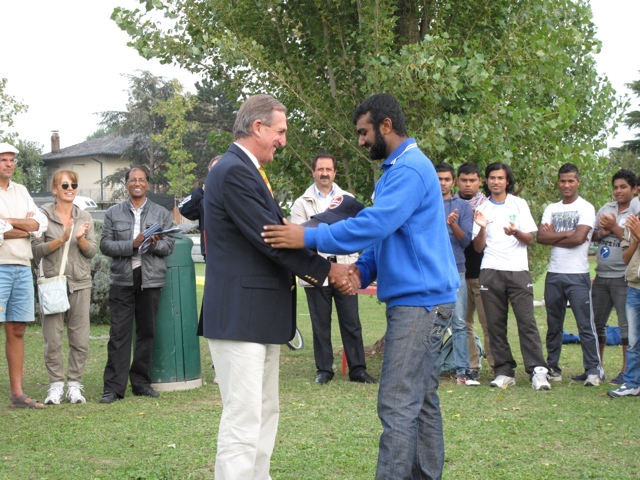 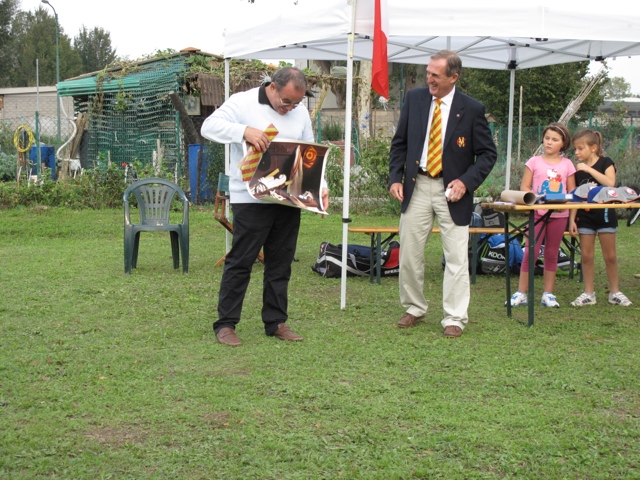 MCC versus Italy A - Game 1

The team travelled to Campalto for the game against Italy A.
The game was played under ICC one day international match rules and for the first time, the team had to deal with power plays and free hits.
Italy A batted first in damp conditions and found the pace of George Brooksbank difficult to cope with, while the left handed paceman found the matting pitch something of a trial Rob Woods bowled with his usual economy and made the first breakthrough with two wickets. Not to be outdone Brooksbank came back with a hat trick and Italy A were in trouble at 25-5. The pressure from the MCC bowlers was unrelenting with the captain and Nick Fielden both chipping in with a couple of wickets. The home side made it to 97 all out, but with many overs unused.
Mike Sutliff and Kevin Barrett opened the batting and Sutliff took an immediate liking to the home team's bowling, plundering 20 runs from one over, which included a towering straight six from a free hit. Sutliff went to an ill-advised call for a quick single, but by that time the Club was in an unassailable position.
The MCC won their 4th game of the tour by 6 wickets and remain unbeaten.
The players changed in a nearby hotel and spent the rest of the afternoon watching the Ryder Cup at a local cafe. In the evening we enjoyed a meal with the Italy A side before taking the coach back. 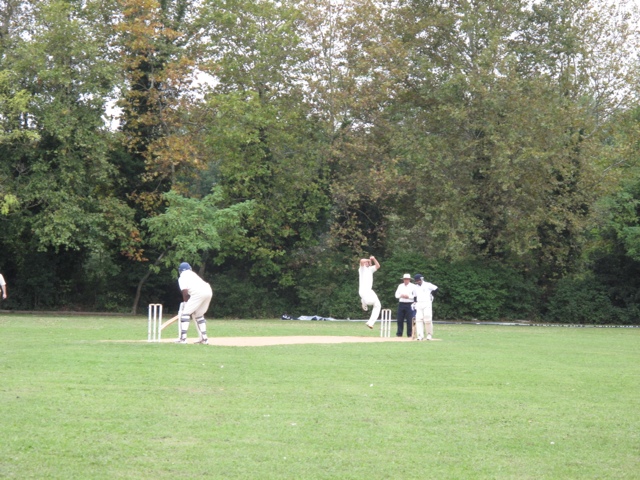 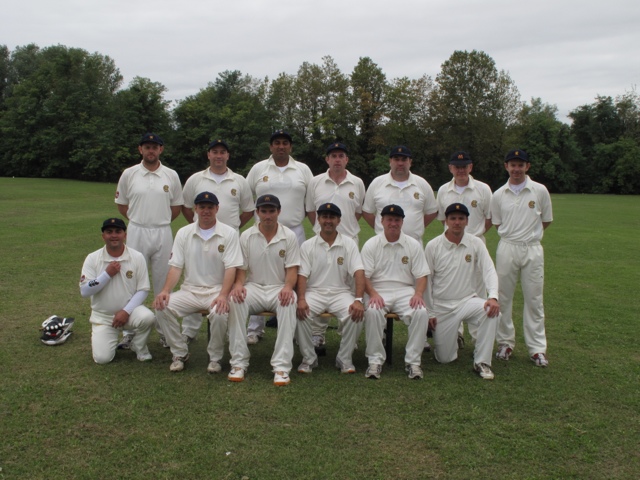 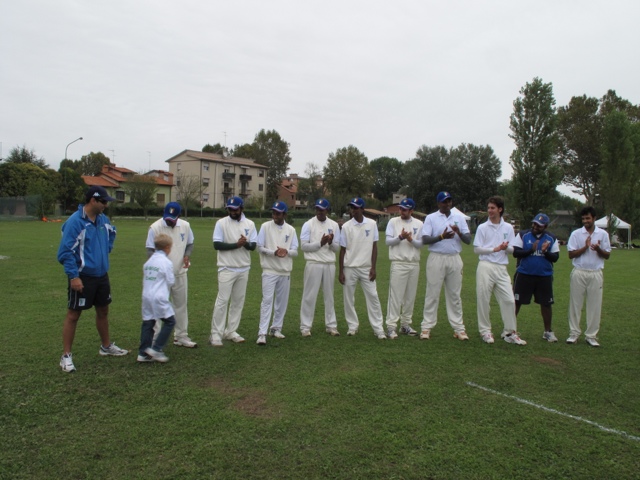 A trip to Venice

Friday was a rest day and the team enjoyed some Venetian sunshine and a guided tour of the more popular areas. 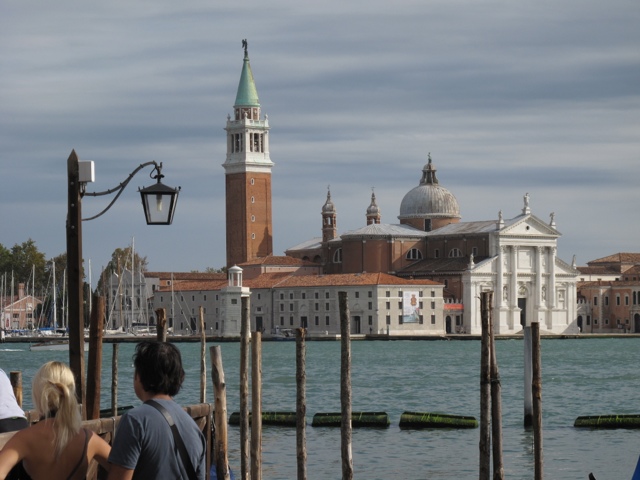 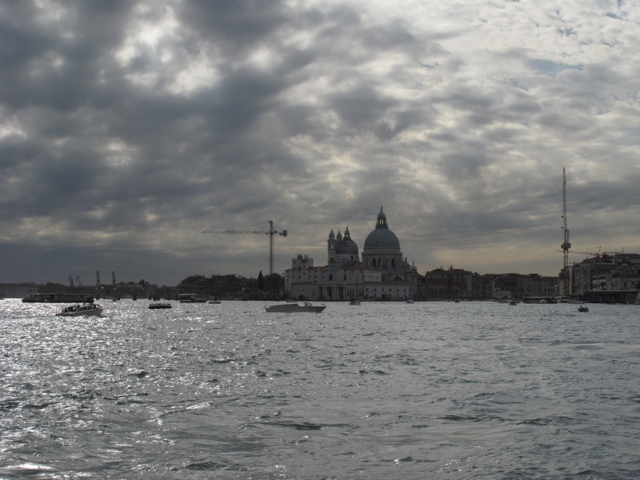 An uneventful day traveling from one hotel to another.
In the afternoon, some of the players coached at the Olimpia Casteller Cricket Club 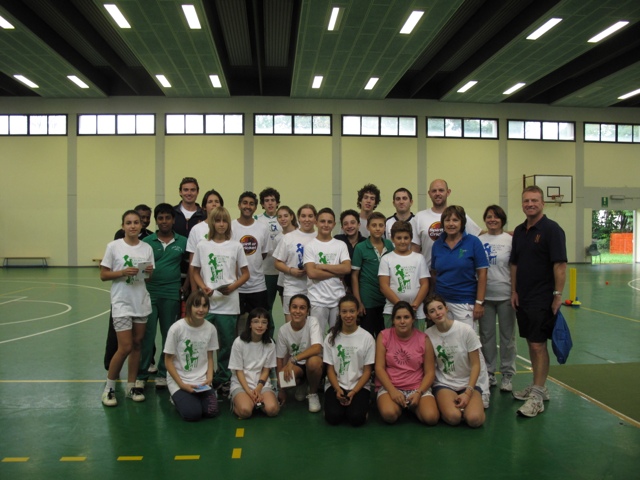 On Wednesday we traveled to Lodi, about 40 minutes from Milan. The ground was a little cricket paradise in the countryside and would have looked perfectly at home almost anywhere in England.

The MCC won the toss, batted and immediately found value for money from the fast matting pitch and short cropped outfield. The captain opened the batting with Kevin Barratt. Idle opened with a wicket maiden, Kevin making the long walk back having nudged one gently to first slip. But the 50 came up in the 9th over, the hundred in the 24th and 200 in the 39th. Nick Curran put together a very well worked 69, and Russell Lane came in down the order and hit a quick fire 49, to give the club 217 off 40 overs.

Lunch was a splendid spread of local food and wine, and was much appreciated by both sides.

Ashley Metcalfe took the new ball for the first time in his long and distinguished career, and George Brooksbank opened from the Farm End. George, relishing the opportunity to use an English ball for the first time on tour, took two wickets in his first over and put the home side on the back foot - where they stayed for their entire innings. But some spirited hitting - taking advantage of some gentle spin - gave the local crowd something to cheer.

A third win on tour was recorded, but more importantly we had given another local club side an excellent day's cricket.

Presentations were made and gifts exchanged. Once again we were made very welcome and received outstanding hospitality. The post-match spread of local cheese and wine was really appreciated too. 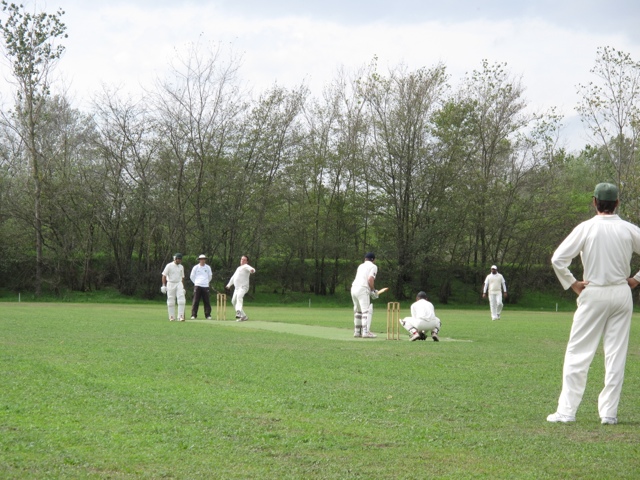 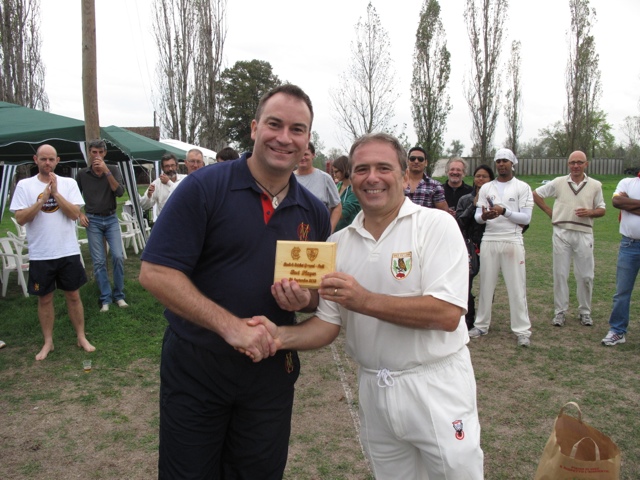 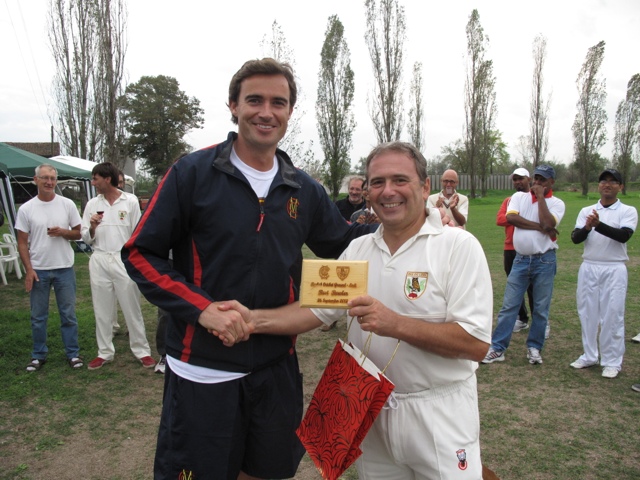 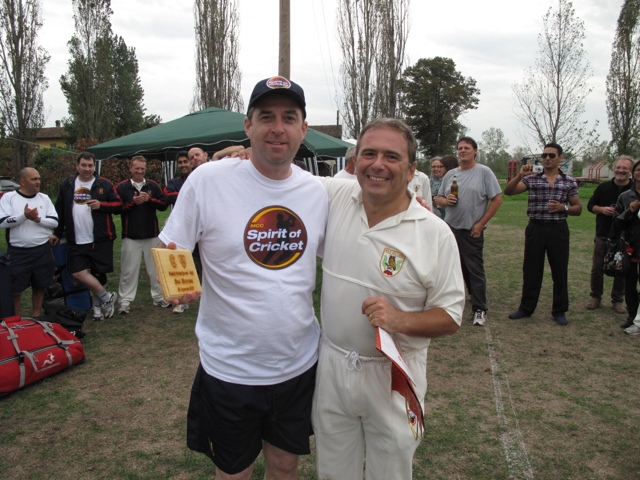 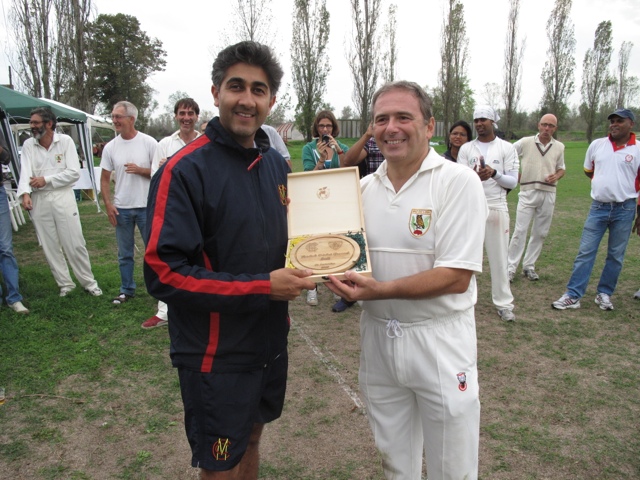 The team traveled to the Centro Sportivo ex Italtel for the fixture, a quiet and quite rural ground with.
The home side won the toss and elected to bat. They made a good start and put on 50 runs in the first 8 overs, but after that, the accurate MCC bowling started to tell. A brief butvery intense shower threatened to spoil things, but play continued without interruption. Wickets fell regularly and held back the score, but a late surge from their number 11 brought the score to a very respectable 126 all out.
Lunch was a very good curry and the hosts treated us with great kindness.
The MCC opening batsmen had few scoring opportunities from the Kingsgrove bowling, with movement coming through the air and off the pitch. The first wicket fell on 11, but a second wicket stand of 48 steadied the situation. Russell Lane was run out for 38 by a direct hit. An earlier throw at the stumps had also produced a direct hit; to the umpire's head, but he shrugged it off and continued as before.
The MCC went on to win by 7 wickets.
After the game, presentations were made by the 2 captains and the Kingsgrove No 11 received an award for his batting and bowling. 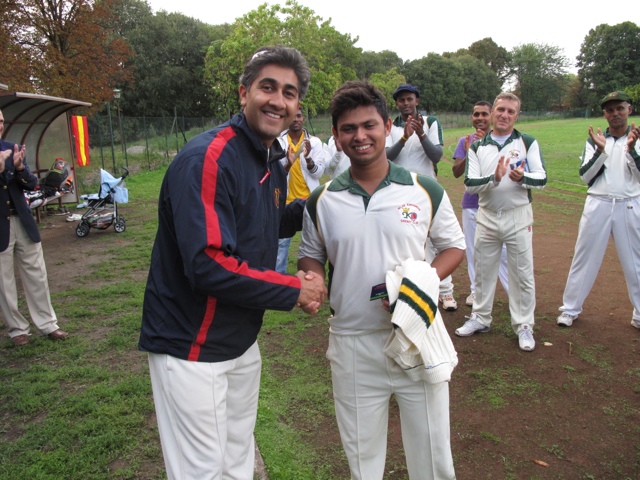 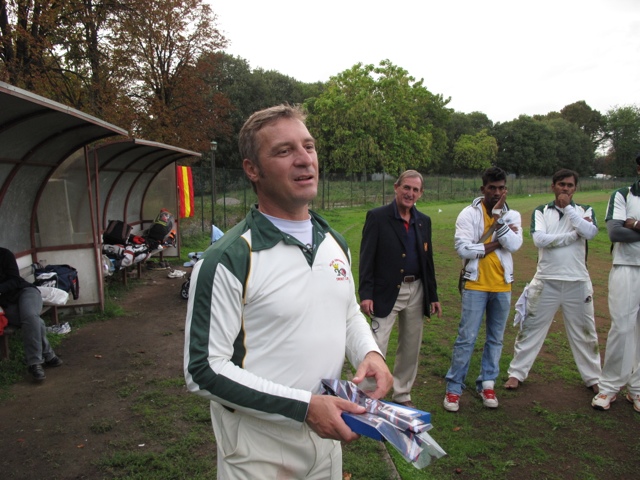 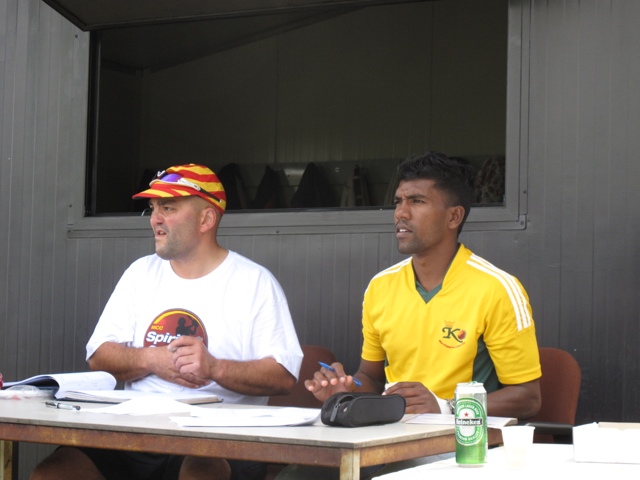 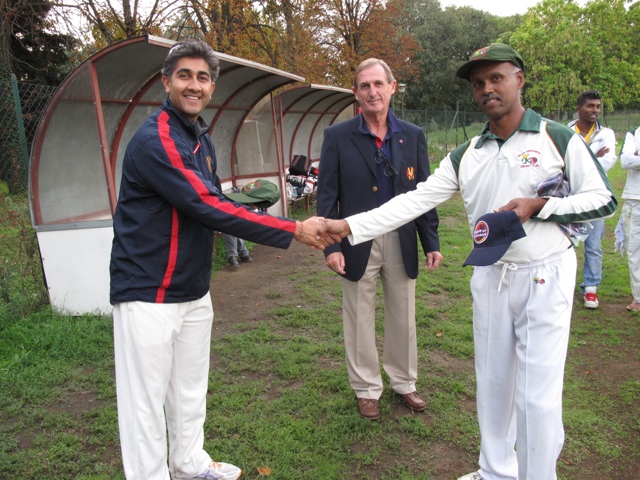 Morning of the third day was devoted to having a lie in and then we set off for Milan.
The trip through the mountains was spectacular and almost everyone enjoyed the views, but as we moved onto the plain, it became darker and darker until as we entered Milan, the heavens opened.
In Milan there was rain. Lots.
We ducked out of the coach into the hotel trying to keep ourselves dry, mostly unsuccessfully. But by the time we had changed the rain had stopped and the skies cleared.
The centre of Milan is a short metro trip from the hotel and we went to the Duomo. Fashion week was ending and we spent some time people watching as we ate and then retired to a terrace overlooking the Duomo for cocktails. 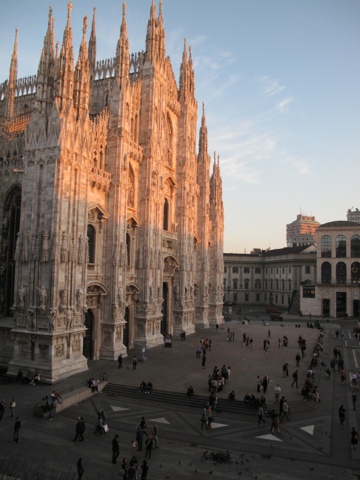 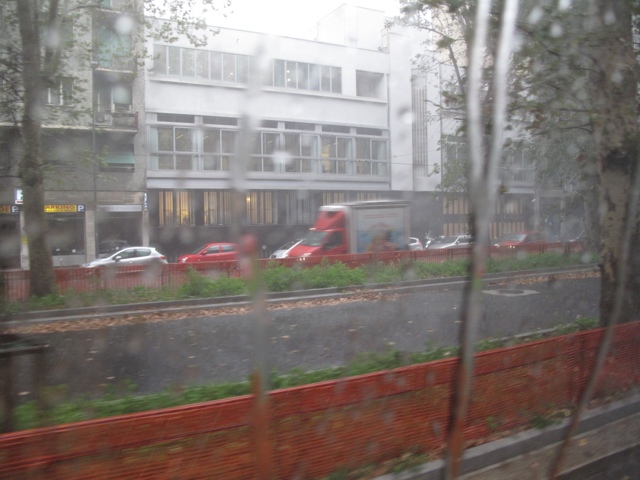 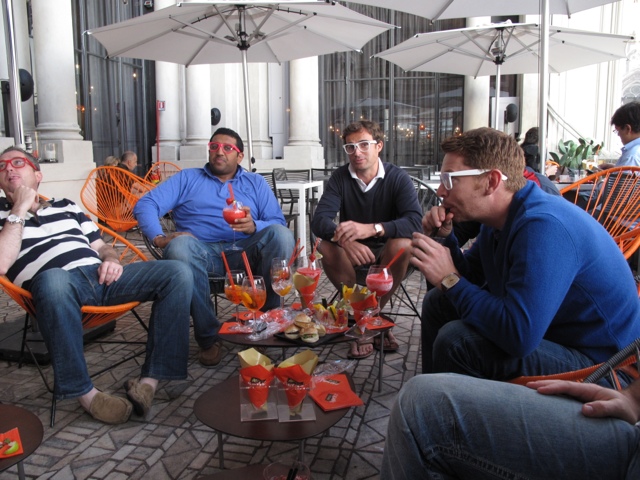